FTP (or File Transfer Protocol) is a protocol that allows you to transfer files from a server to a client and vice versa (as FTP uses a client-server architecture). FTP is among the oldest protocols as its origins can be traced as far back as 1971 according to Wikipedia.

There are also variants of FTP. Such include SFTP (SSH FTP, not to be confused with Simple FTP), FTPS (FTP SSL), and others. SFTP, as the name implies, is done over SSH. FTPS is plain FTP with TLS/SSL encryption.

Alpine Linux has various FTP clients and servers that you can install and use:

There are also plenty of other clients available too, some not available in Alpine's repositories in fact. However, we will only be covering the clients and servers mentioned above. In addition, there are several graphical clients. See #FTP Clients for more details.

In Alpine Linux the default FTP server is vsftpd. However, it's not widely used due to common hosting panels not handling it's configuration management. In contrast vsftpd is more secure and doesn't require many updates.

vsftpd claims to be the "most secure and fastest FTP server for UNIX-like systems". It's the default FTP server in NimbleX, Slackware, and many others. In addition, it's also recommended because of relatively easy configuration.

The installation does not work out of the box, cos enable by default anonymous access is enabled and it only works with IPv4 only.

Per user ftp files can be supported by special directive in the vsftp.conf file using user_sub_token to something like /home/$USER/public_ftp directory by example if we enable it (process are described below in further section "vsftpd configuration".

vsftpd is available in the Alpine Linux repositories. To install and run vsftpd, simply run the commands below:

By default, Alpine's vsftpd package does not modify the default configuration. If you leave the configuration untouched, then vsftpd will be configured exactly the same as if you downloaded vsftpd from [its site]. Regardless, you might want to change the server configuration anyways.

Because there are no customizations to the default configuration (in other words no Alpine-specific customizations), the configuration may not mean easy maintenance of the server, among other things. See the Production VSFTP system: vsftpd + MySQL + SFTP wiki page, which goes in depth about configuring the lighttpd web server and others [fixme: page does not exist].

Starting vsftpd: After the installation vsftpd is not running. As we said in first section, was started already but if you want to start vsftpd manually use:

After you issue this command, OpenRC will tell you the status of vsftpd.

Stopping vsftpd: If you want to stop the web server use stop in the same way of previous command:

Restarting or reloading vsftpd: After changing the configuration file, you must either restart or reload vsftpd in order for the new configuration to take effect. You can issue one of the following commands below to achieve the desired effect:

The latter command entirely restarts vsftpd, while the former only reloads vsftpd's configuration file. The former command might be more desired as it prevents having to reload vsftpd entirely.

After issuing one of the commands, you might see something similar either to this output:

(for restarting vsftpd) or to this output:

Using the proper runlevel: By default no services are added to start process. You must know what you want and what will these services do. Furthermore, runlevels aren't present in Docker containers (per se), and Alpine is used mostly in those containers. You must add the service only to the 'default' runlevel, not to the 'boot' runlevel. Networking isn't enabled during the the 'boot' runlevel, and thus it doesn't make much sense to run an FTP server without networking.

This section is assuming that vsftpd is running. At the moment, there might not be a user 'ftp' allowed available but the server is up and running.

Be sure to change server_address with the actual IP address of the server. The common response will be OPEN if the server is running.

As FTP uses a client-server architecture, you will need an FTP client if you want to interact with an FTP server. Alpine provides two packages for command line and batch processing of files over FTP. The following is a list of some graphical FTP clients:

The following is a list of some command line FTP clients:

You can also use any web browser that supports FTP as an FTP client also, as is obvious. To do so, simply enter <code>ftp://server_address</code>, where "server_address" is the IP address of the FTP server.

LFTP is a sophisticated file transfer program that supports a number of network protocols. Such include FTP, HTTP, SFTP, FISH, BitTorrent, and possibly more.

lftp has the following features:

lftp has been provided in the main repository since Alpine 3.6, so it's a supported package that's ready for production use.

The main configuration file, /etc/lftp.conf comes with different examples and comments. On startup, lftp reads /etc/lftp.conf, ~/.lftprc, and ~/.lftp/rc (in the specified order). You can use those files to set system-wide and user-specific settings.

In your configuration file, simply use the command set followed by the name of the setting, followed by its value. Use on/off for boolean values. Here's an example:

You can set specific settings for specific servers only. Simply append a slash (/) and the server name to the setting.

By default, lftp is not very verbose about operations it performs in the background. If you want more output, e.g. for debugging purposes, you can use the 'debug' command (without the 'set' command):

Note that if you use the -d switch from the command line, the debug setting will be overruled and the full debug output will be displayed.

If you prefer some commands to be called by another name, you can set aliases:

The last alias (edit) should be all in one line. It allows you to get a remote file, edit it with vim (change as needed), and place the edited file back on the server. This is very convenient!

Below is an example of a mult-part download over the SFTP protocol:

Here's a breakdown of the above command:

While PCManFM is a file manager, installing the gvfs plugin allows you to use it as a graphical FTP client. To connect to an FTP server, you can do the following:

Check the picture for further reference. 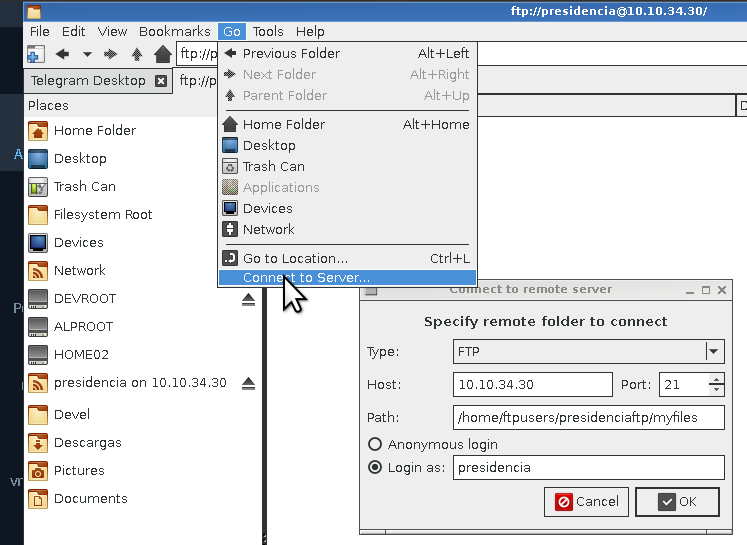