Alpine Install: from a disc to a any computer single only boot

From Alpine Linux
(Redirected from Alpine Install: from a disc to a new computer single only boot)
Jump to: navigation, search

Overall description: Alpine Installation from a official disc/iso burned into DVD/CD to a new computer with or without UEFI and will be single only boot, it's means that any thing in the computer and their disc will be erased to put Alpine Linux as main system

This document will guide you to install Alpine into a new empty or just fresh PC or Laptop hardware computer, use if you have a BIOS or UEFI based hardware and only wants Alpine Linux into it. Please take a shoot at the Alpine_newbie_install_manual for others options like the USB media way if you don't have optical drive input media.

Preparing the source medium to install

Download the source medium to install and put into your home documents in a modern computer. There are more hardware medium sources to download, like the arm and i386, but ISO CD/DVD images are only to PC/Laptops that are i386 and amd64, so by downloading the x86 (32bit) flavor will be same for both cases, but UEFI need 64bit, so change to the x86_64 (amd64) if your computer is the most modern and lasted hardware.

The source medium to install for UEFI or modern hardware are just 64-bit only, the download URL will be as following format: http://dl-cdn.alpinelinux.org/alpine/v<VERSION>/releases/<ARCH>/alpine-standard-<VERSION>.0-<ARCH>.iso where ARCH and VERSION could be:

So using 3.10 version the available links to download will be:

Graphical download: Just point the web browser to that url and the download of the iso file will start. A file with .iso extension type, with name like "alpine-standard-3.10.0-x86_64.iso" (if amd64) or like alpine-standard-3.10.1-s390x.iso (if s390x); will be downloaded commonly into the Download directory of your home documents filesystem.

Command line method: in unix-like terminal execute: wget -c -t8 --no-check-certificate http://dl-cdn.alpinelinux.org/alpine/v3.10/releases/x86_64/alpine-standard-3.10.0-x86_64.iso, and where you run the command, in that place/dir will be downloaded the file.

Burning the source medium to install

After downloading the source media file from Alpine download page put the blank disc into the input optical drive named DVD/CD Rom and open your CD/DVD recording program, choose to "burn from iso file" and wait the process will end.

In Linux, assuming the blank disc is in the optical drive, the command to record/burn the downloaded source media file is :

If your blank media is a DVD or BD disc the command will be then :

Note: growisofs has a small bug with blank BD-R media. It issues an error message after the burning is complete. Programs like k3b then believe the whole burn run failed.

When the machine start, you must be sure to choose the optical drive (commonly named CD/DVD Rom drive), so the disc/iso will boot and after a while a command line shell will show you:

Tip: If your system is not configured to boot from a CD/DVD drive, it must be configured in the BIOS, ask/search to your vendor or technical support, Toshiba computers need to hit F1 to choose boot medium, DELL must hit F11 to choose medium for example, and so and so 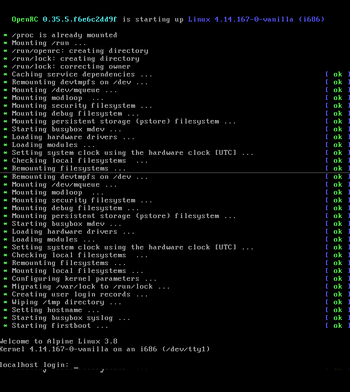 The setup install for normal process

After boot up.. a command line shell of a complete ready to use Alpine will show you.

Warning: This process ONLY WORK with "EXTENDED" ISO or recent versions of "STANDARD" ISO image downloads.

At the login: to appear, type root and press enter, no password will be asked if run from image boot.

Run the setup-alpine script as show in the image:

Host name, which will be the name of your computer; using localhost are enough and recommended for testing purposes cos permits apply mostly how to's and tutorials of the wiki pages.

Choose your network card, most people can just go with the default (just press enter), a second question will raised about any other configuration, just type "no" and then press enter to bypass the step to property setup after installation finished property.

IMPORTANT NOTE: mostly in x86 and x64 ISO images we can let configurations for later, cos at the most modern the network card, the lest supported or still not well tested. Just type done and press enter.. if you made some wired configuration later another question will raised, will use dhcp? Most people will use DHCP, so press enter again, if you have Internet connection from ISP most settings are just DHCP so all will be configured automatically.

The DNS will be automatically detected, if not will ask for, just type for domain "" (empty) then press enter, later and 8.8.8.8 as picture show and then press enter to next question:

Next a root password must be defined, twice for confirmation as picture shows, if are too short will said as a warning "bad" but nothing wrong.. just retype and go. Take note that when typed no chars will be show, all will be invisible when type the password.

Select a timezone, just press enter to use UTC when perform a single installation.

Then setup script will ask for proxy chooser.. just type none and then press enter

Then setup script will ask for repository mirror chooser.. just type done and then press enter, this will be configure many times later during usage of the system. Almost any tutorial of newbie pages will explain detailed so lest bypass using "done".

Choose an SSH server allows you to remotely manage your machine. OpenSSH is what the big distro's use, Dropbear is a tiny SSH replacement. Recommended to type openssh and then press enter, cos you able to connect using command line from Unix-like systems also is the offline available in all alpine installer images.

This is for time sync, just press enter to use the image offline available can be changed at post install.

This will setup the destination usage of the files

Witch disk choose to use?

To choose the disk destination .. commonly sda are the hard disk cos sdb the USB boot or CD/DVD image

How would be used?

Then choose type of installation .. those are described at Setup modes section at Alpine setup scripts wiki page. "sys" mode is the familiar install to disk well knowed for usage as main OS to computers.

After all a confirmation question will raised, type "y" if everything are ok and the setup will proceed to erase, format and copy the files to the destination disk choose!

After all of the scripts in the setup end, a "reboot" will be offered, just type "reboot" and press enter, remove the boot media and newly installed system will be booted.

You cannot see a graphical window system? take it easy and get calmed down.. in Alpine all are made by the right way.. so if user need a desktop.. user can install a desktop follow the next: Alpine newbie apk packages or bypass and go directly to Alpine newbie desktops

For others ways to install see the Alpine_newbie_install_manual